You are here: Home / About Lake Erie
INSTANT BOOK 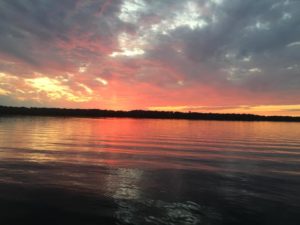 The southernmost of the Great Lakes, Lake Erie’s water flows in by the Detroit River from the upper lakes — Lake Superior, Lake Michigan and Lake Huron — along with a few tributaries such as the St. Clair River and Lake St. Clair. The main outlet though is Niagara Falls.

Lake Erie is a tail-like shape, and that is reflected in its name, which is erielhonan, the Iroquoian word meaning “long tail.” The lake is around 241 miles long, 57 miles wide and has 871 miles of beautiful shoreline, including its islands.

Lake Erie was formed by a receding glacier making it quite young — around 4,000 years old.

Explored last by Europeans. Louis Joliet a French explorer is credited with its discovery in 1669

The water temp is normally in the low 70s in the summer, which makes Lake Erie quite a popular area. While in winter, the temperatures drop to freezing, and the water freezes over more than any other of the Great Lakes because of how shallow it is. The average depth is around 62 feet the maximum depth is 210 feet.

In the lakes shallowest area, Water is around 25 to 30 feet, which allows strong winds to kick up powerful waves.

The Lake draws many sports anglers and has a large walleye fishery. guide boats take visitors out onto the lake to catch the smallmouth bass. Once frozen over Ice fishing becomes very popular.

The Lake has its own legendary monster Bessie most likely a massive sturgeon.

The lake invaded by mayflies in 99 was viewed as a sign of the lake’s returning health and a balance of nature.

Its rich soil, causes the region to have a large amount of concord grapes. Lake erie itself is also has algae blooms once in a while.