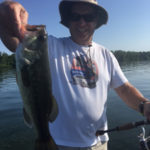 Small mouth bass fishing is best in spring on the Lakes reefs, in harbors and the tributary streams. The outstanding number of bass that can be caught during this time is due to the higher number of bass in the area. The largest bass are normally caught in spring, with a way better chance of catching a 6 pound plus bass in the springtime than any other season of the year. After the ice melts, the small mouth bass seek out the areas where water warms up faster than in the open water. The small mouth bass seek areas for spawning and to to feed on the schools of emerald shiners that also move into these warmer waters. This bite begins in April and lasts through the regular season in late June. The fish concentrate in the tributaries, canals and harbors, and open lake shoals and reefs. 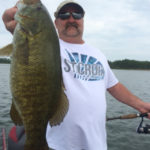 Largemouth Bass grow between 4 and 8 inches in the first year, 8 and 14 inches in the second year, and 18 inches in the third year. They have dark blotches and are mostly green, the blotches create a horizontal stripe down the middle on each side. The belly can be light greenish to almost white. Their dorsal fin is nearly divided with the front portion having nine spines and the back portion having 12 to 13 soft rays. The upper jaw reaches far behind the back margin of their eye. fully grown largemouth are top predators in the aquatic system. The Fry feed normally on zooplankton and some insect larvae. At around two inches long they then become active predators. Adult bass feed exclusively on smaller fish and large invertebrates such as the crayfish. Larger fish even eat smaller bass.